Virgin Mary, Queen of Heaven and Earth: Why Do Catholics say that?

To show the reader through a story of real events in the years Jesus was born in Nazareth and when he lived, his mother Mary’s point of view and all she lived and suffered.

Mary, a simple woman, was jewish. She lived in Galilee at the first century, her life was impacted and changed forever when Angel Gabriel announces and asks her if she wants to serve God by being mother of Jesus during 33 years -duration she didn’t know yet -and she accepted. 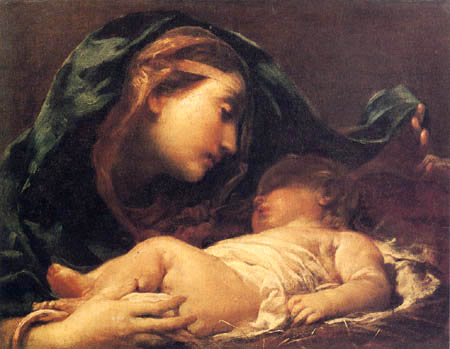 Jesus of Nazareth or Jesus Christ lived, died and resurrected in the first century, it has to be mentioned that fact history of his existence is supported by more evidence than any other historical figure of antiquity, and that is why any educated person doubts about his existence, however faithless people doubt their deity. Regardless of who doubt, that does not change the facts, and God lives disregarding that.

Jesus’ father is God himself, providing the male chromosomes, and the Mother of Jesus is Mary, she brought genetically and physically human chromosomes to her “flesh of her flesh and blood of her blood” son. Virgin Mary conceived Jesus in a special and miraculous way given that the father of her only child is not human.

Virgin Mary was a mother, just as we all have a mother since none of us has been engendered but born from a mother, we’re the result of a normal conception: human male + human female. Mary was and is the biological mother of Jesus, Jesus Christ, and the simple fact that Jesus was “flesh of her flesh and blood of her blood” makes her the most special woman who has ever lived, and even though in the Bible there is not much mentions about Mary, it is easy to know everything a mother does forhera child, especially for the most special child that has ever lived.

He was conceived in a special way and, according to theology, he had a painful natural childbirth, without anesthetics. This is a mother who since her child’s first breath, she suffered for his son to give him life, and they became spiritually united in an inseparable and unique mother and son union. As his son is God, their spiritual union is unique, special and eternal.

Some Protestant Christians had the idea of taking away Virgin Mary’s divinity, hundreds of years after the creation of the Catholic Church, along with other ideas they seemed to be upset about, just because she doesn’t appear much on the New Testament. It is worth mentioning that the New Testament relates, from Jesus’ disciples’ point of view, the most remarkable moments of Jesus’ 33 years of life. Meaning when he began his public life, when he began to preach. At this time he had already emancipated -left home -as we do today, we leave our mothers to get ourselves out into the world to make our own lives. It is logical that his mother Mary was not with him at that time, it is logical to think she stayed home when Jesus told her it was time for him to leave so that he could do what he came into the world for: to change it and save it. It is absurd the idea that she should “be more present” in the New Testament, given that part of Jesus’ story was not for his mother to live. She had done it already, with ovations, she did a spectacular job for 33 years.

The baby bottles and diapers

Commonly associated directly with having babies given that newborns should eat every 2-3 hours, even at night. Baby bottles had not been invented yet, which means Mary fed him from her breast during the first months or years of his life, to strengthen him, help him grow up and have a healthy immune system. At that time life expectancy was 30 years so it is easy to imagine Virgin Mary took special care of her son, to let him reach 33 years. Baby diapers were fabric, not like now available disposable ones, making the work of the more complex, time-consuming and uncomfortable diapers. It is easy to imagine the work of a mother during all stages of a child: childhood, adolescence, adulthood to 33 years. Imagine that!

During Jesus’ growth of Jesus, there were some supernatural events that should be explained somehow by Jesus’ nature. Who was always by his side to be a spiritual guide, rather than his mother Mary?

Joseph worked to support the family as a carpenter -he taught the craft to Jesus -so the spiritual guide to God’s son had to be a challenge and privilege for Mary and Joseph. It is easy to say that Jesus adopted some of their personality traits, ways of being and acting from her birth mother and adoptive father; the holy family was an admirable moral and nobility family.

We can only imagine Mary’s nervousness with all attacks on Jesus during his childhood, at some point they had to flee to Egypt because the king gave orders to kill all the children when he heardone of them was born “king of kings”, besides the envies when seeing a child so wise, and especially the normal dangers of the era that: bandits and resistance… His protective mother role was in constant stress, and surely his nights were not resting, taking care of her beloved son 24/7 for 33 years. There is no doubt that during those years his arch enemy, the devil, attacked him directly and indirectly as he could, since the very existence of Jesus repulse the devil to the point of being the reason for separation from God. Virgin Mary’s child was not normal, and therefore the problems were bigger.

The love that grew in Jesus for his mother Mary, a good mother who was there for him at all times from birth to death, is somethings you should be able to imagine. If Jesus is God, and he loved his mother that much, it is easy to imagine that Mary is our Queen of Heaven and Earth. There is no other special woman for him. Mary is now the mother of us all, and our brother Jesus who became man and lived like us and suffered to save our souls and give them the option of salvation if everyone chooses such path to salvation.

Smear campaigns to the mother of God continue, though most Protestants and other Christian sects venerate Virgin Mary, the other hand have a smear campaign against her and spread that via Internet. While I was writing this article I found several links, including Wikipedia, with serious flaws, interpretations explicitly written by some of the authors who wrote the “investigation” of Virgin Mary, expressing their erroneous views as the idea that the Holy Family he was separated and embattled. What a lie! To include extracts of writing where they interpret a phrase of Jesus as literal and irosa, when Jesus clearly always spoke with parables, figuratively and love and inclusion for all, without excluding anyone much less his mother.

Mary is special, is our Queen, his life and proximity to Jesus makes it clear that for us Christians there will never be more special woman than her, and that Jesus loved his mother so much that we pray to her and ask her to help us reach God. Since Angel Gabriel announced to her she would give birth to Jesus until her Assumption to Heaven, it all let us clear her key role. She is our first and greatest saint to who we pray and ask to intercede for us and help us in our time in this world just as she did and how she taught Jesus to do.

During the writing of this article my youngest daughter 5 years he wrote the following: I love Mary and Jesus.

How to choose a profession?

Why don’t we remember the good stuff?